In November of 1906, a parchment codex (sheepskin paged, bound book) with painted wooden covers was dug up from the sands of Egypt.

It was found in sand filled ruins of a city vacated about 200 A.D. at a place called Soknopaiou Nesos (Dimet, or Dimai), and sold to Charles Lang Freer, an American antiquities collector who did not fully realize the importance of what he was buying. 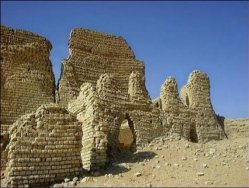 Ruins of ancient Soknopaiou Nesos (Dimet) Photograph copyrighted by Jimmy Dunn and used via his permission granted to Lee W. Woodard. This city was vacated in approximately 200 A.D. --When nearby north shores of Lake Karoun withdrew from the city by a few miles because the lake’s levels drastically fell, for some as yet unknown reason. Universal testimony says that Codex W was dug up here in 1906. Scholars, not knowing the above, guessed at date of circa 400’s for Codex W, but why would someone in 400’s have buried precious Gospels in 200 A.D. ruins? They didn’t. The guesses about the date of Codex W were wrong, as Lee W. Woodard demonstrates in his book: “First Century Gospels Found!”

He generously turned the codex over to the Smithsonian Institution, and his own Freer Gallery of Art, a deed that drew the attention of a few scholars . . . who had little idea of what they were reading!

They thought they had found a very old manuscript of the four gospels, and indeed they had.  But what they could not grasp was that they had in their hands an original, First Century set of the gospels, marked with round seals by the four evangelists (or their scribe) and actually dated to the exact year by clever pictorial and alphanumeric dating system.

What blinded them to the facts were two lines of evidence:

One, the unusual handwriting.  Even with their considerable paleographic skills, they still estimated the age of the codex writing anywhere from the Second to the Ninth Century.  Quite a range!  The first scholar to weigh in on the subject thought the writing resembled a few samples of late Fourth Century to Fifth Century Greek text he had seen, and said so.  His opinion stuck because no one had any hard evidence to prove him wrong.

Two, the Amixed-block@ text.  Years before 1906, the scholarly community had already devised elaborate theories about how the gospels were written (as to who copied from whom), and their minds were made up.  But inconveniently, the newcomer manuscript did not fit any of those theories.  Not at all.  Instead, the text was composed of six large, distinct blocks that belonged to one of four divergent text families.  Their best guess to explain this?  They said the codex must have been a patchwork of various scraps, scarce remnants of Emperor Diocletian's book-burning persecution in 303.

Unfortunately for this quilt theory, it contradicted their #1 line of evidence, which dated the codex to the vicinity of 380 or later by which time Christianity was the state religion of Rome, and the empire was awash in Greek manuscripts (today numbering over 5,000).  They simply could not fathom the disturbing idea that the codex (now called Codex Washingtonensis, or just W), only appeared to be block-mixed because it was one of the original trees from which the other text families branched out.

Today, further research, aided by infrared and ultraviolet photography, has turned the entire picture upside-down.  Half a dozen lines of evidence for a First Century date have developed, and some are quite compelling.

This site examines three of those lines.  The conclusion offered here is that Codex Washingtonensis enables much more confidence that Jesus' words and works are accurately relayed unto us.  The Four Gospels are carefully written witnesses by His contemporaries, so that we can have confidence that the Christ of the Gospels is also the Jesus Christ of history.

We are pursuing the goal of seeing our dating of Codex W further validated by AMS (carbon-14) and other modes of scientific testing.  But if you are a scholar who is comfortable with the Greek language and New Testament textual criticism, and you are already intrigued by this brief introduction, we invite you to inquire about joining us as an ally or colleague as we draw together a working team to bring the news about Codex W to the academic community, the theological establishment, and the general public through media interviews and writing/interaction on the Internet.

Date and Place of Completion of Final Versions

The new book is 420 pages (8.5" x 11.0") with more than 100 color photographs. For the time being it needs to sell for $70.00 U. S. per copy, with shipping charges for US Priority Mail shipment paid at my end, except for Overseas & Canada, which will have $12.00 shipping and handling charge, for Global Priority Mail shipment.
Click here to order
this book